The wobbliness of the North Hemispheric Polar Jet Stream made the news in 2013/14 as the result of a broken Polar Vortex, dropping masses of cold air at mid-latitudes, bringing winter weather all along their paths. In 2014/15 the Jet Stream kept wobbling, however this time, without a persistent Polar Vortex broken. I called them drops of weather and discussed the significance of their formation and the implications.

We are at the transition from Summer to Winter 2015/16. At the Iberian peninsula, even at Canary Islands and through the Mediterranean sea, we have started to see such drops of weather to appear once again. The sequence between cold and warm periods is creating wide contrasts in temperature. It seems that it is starting to rain drops of winter and that this must be the new Autumn to come.

In the following video I present an animation with images taken from satellite (Eumetsat Airmass) between the 20th Oct 2015 and 9 Nov 2015 showing the behaviour of the Jet Stream and the recent masses of cold air moving at Mid Latitudes. I also gathered some images showing the forecast built from GFS model for pressure at 500mb and temperature showing the expected behaviour of the Jet Stream from 9th Nov to 20th Nov. In total, between observation and forecast, there is a 30 days period.

If you take your time, you can correlate visually the movements of the cold and warm masses of air getting close to the Iberian Peninsula and the variations in Temp shown in the charts.

The reason behind this wobbling behaviour of the Jet Stream and the implications for climatic developments have been discussed in previous posts such as A climate between Waters, Discussing Climatic Teleconnections and looking at the Ice/Frost situation at Antarctica.

These three publications are part of a theoretical approach proposed in this blog to explain recent, present and future developments in global atmospheric dynamics. One basic principle applied suggests that the Poles have being kept isolated from receiving heat by the Polar Jet Streams meanwhile the rest of the atmosphere was increasingly heating up. Once the close and constant contact between warm subpolar and cold polar masses of air have started to wear off the thermal contrast of the Jet Streams, these become wobbly and began to allow a fluent interchange of masses of air between both sides. Ultimately, the new volume of space being opened at Polar latitudes to incorporate heat from warm masses of air would increase the thermal capacity of the global atmosphere to keep accommodating GHGs and water vapour without increasing the net global temperature. 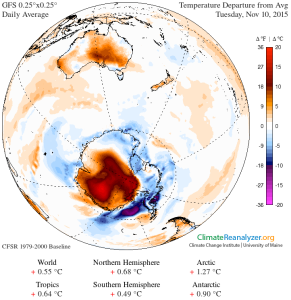 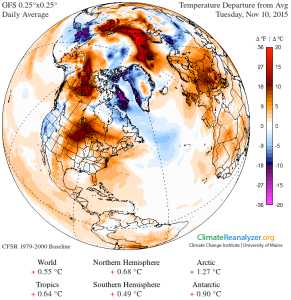 (This post is part of a more complex piece of independent research. I don´t have founding, political agenda or publishing revenues from visits. Any scientist working in disciplines related with the topics that I treat in my blog knows how to judge the contribution that my work could potentially add to the state of knowledge. Since I am in transition looking for a position in research, if you are one of those scientists, by just acknowledging any value you might see from my contribution, would not only make justice to my effort as independent researcher, but ultimately, it will help me to enhance my chances to find a position with resources to further develop my work.

I believe that the hypothesis that I have presented in previous posts in this blog (here,here and here) could help to understand present and possible future scenarios in atmospheric circulation. However, this is an assessment based on observation which needs to be validated throughout open discussion and data gathering. So please feel free to incorporate your thoughts and comments in a constructive manner.

If you feel like sharing this post I would appreciate to have a reference about the place or platform, by private or public message, in order for me to have the opportunity to join the debate and be aware of the repercussion which might generate d.fdezsevilla(at)gmail.com)

For anybody interested in the posts related with this discussion here I leave you those more relevant in chronological order (there are comments bellow some of them. Please check them out):

Data policy The products processed by "Diego Fdez-Sevilla PhD" are made available to the public for educational and/or scientific purposes, without any fee on the condition that you credit "Diego Fdez-Sevilla PhD" as the source. Copyright notice: © Diego Fdez-Sevilla PhD 2013-2019 orcid: orcid.org/0000-0001-8685-0206 and the link to its source at diegofdezsevilla.wordpress or permanent DOI found at Reearchgate. Profile and verified scientific activity also at: https://publons.com/researcher/3387860/diego-fernandez-sevilla/ Should you write any scientific publication on the results of research activities that use Diego Fdez-Sevilla PhD products as input, you shall acknowledge the Diego Fdez-Sevilla's PhD Project in the text of the publication and provide an electronic copy of the publication (d.fdezsevilla@gmail.com). If you wish to use the Diego Fdez-Sevilla PhD products in advertising or in any commercial promotion, you shall acknowledge the Diego Fdez-Sevilla PhD Project and you must submit the layout to Diego Fdez-Sevilla PhD for approval beforehand (d.fdezsevilla@gmail.com). The work here presented has no economic or institutional support. Please consider to make a donation to support the means for making sustainable the energy, time and resources required. Also any sponsorship or mentoring interested would be welcome. Intellectual Property This article is licensed under a Creative Commons Attribution 4.0 International License. By Diego Fdez-Sevilla, PhD. More guidance on citing this web as a source can be found at NASA webpage: http://solarsystem.nasa.gov/bibliography/citations#! For those publications missing at the ResearchGate profile vinculated with this project DOIs can be generated on demand by request at email: d.fdezsevilla(at)gmail.com. **Author´s profile: Born in 1974. Bachelor in General Biology, Masters degree "Licenciado" in Environmental Sciences (2001, Spain). PhD in Aerobiology (2007, UK). Lived, acquired training and worked in Spain, UK, Germany and Poland. I have shared the outcome from my work previous to 2013 as scientific speaker in events held in those countries as well as in Switzerland and Finland. After 12 years performing research and working in institutions linked with environmental research and management, in 2013 I found myself in a period of transition searching for a new position or funding to support my own line of research. In the current competitive scenario, in order to demonstrate my capacities instead of just moving my cv waiting for my next opportunity to arrive, I decided to invest my energy and time in opening my own line of research sharing it in this blog. In March 2017 the budget reserved for this project has ended and its weekly basis time frame discontinued until new forms of economic and/or institutional support are incorporated into the project. The value of the data and the original nature of the research presented in this platform and at LinkedIn has proved to be worthy of consideration by the scientific community as well as for publication in scientific journals. However, without a position as member of an institution, it becomes very challenging to be published. I hope that this handicap do not overshadow the value of my achievements and that the Intellectual Property Rights generated with the license of attribution attached are respected and considered by the scientist involved in similar lines of research. **Any comment and feedback aimed to be constructive is welcome as well as any approach exploring professional opportunities.** In this blog I publish pieces of research focused on addressing relevant environmental questions. Furthermore, I try to break the barrier that academic publications very often offer isolating scientific findings from the general public. In that way I address those topics which I am familiar with, thanks to my training in environmental research, making them available throughout my posts. (see "Framework and Timeline" for a complete index). At this moment, 2019, I am living in Spain with no affiliation attachments. Free to relocate geographically worldwide. If you feel that I could be a contribution to your institution, team and projects, don´t hesitate in contact me at d.fdezsevilla (at) gmail.com or consult my profile at LinkedIn, ResearchGate and Academia.edu. Also, I'd appreciate information about any opportunity that you might know and believe it could match with my aptitudes. The conclusions and ideas expressed in each post as part of my own creativity are part of my Intellectual Portfolio and are protected by Intellectual Property Laws. Licensed under Creative Commons Attribution-NonCommercial conditions. In citing my work from this website, be sure to include the date of access and DOIs found at the Framework and Timeline page and ResearchGate. (c)Diego Fdez-Sevilla, PhD, 2018. Filling in or/and Finding Out the gaps around. Publication accessed 20YY-MM-DD at https://diegofdezsevilla.wordpress.com/ ***
View all posts by Diego Fdez-Sevilla, PhD. →
This entry was posted in Biological productivity, Energy Balance, Environmental Resilience, Extreme climatic events, Filling in, Polar vortex and Jet Stream, Water vapour and tagged aerobiology, Atmosphere, atmospheric circulation, Biological Productivity, Climate change, climatic events, Diego Fdez-Sevilla, Environment, environmental issues, Extreme weather, Global warming, Impact of Climate Variability, Polar vortex and Jet Stream, Scientific research, Spain, water vapour. Bookmark the permalink.

67 Responses to Starts Raining Drops of Winter at Mid-Latitudes. The new Autumn? (by Diego Fdez-Sevilla, PhD.)

This site uses Akismet to reduce spam. Learn how your comment data is processed.